A calico cat is a cat that has either white, orange or black-colored fur.

Outside of North America, the pattern is more usually called tortie-and-white. Other names include the tricolor cat, mi-ke (which is Japanese for 'triple fur') and lapjeskat (Dutch for 'patches cat'). Among the breeds whose standards allow calico coloration are the Manx, American Shorthair, British Shorthair, Persian, Japanese Bobtail, Exotic Shorthair, Turkish Van, and mixed breed/non-breed cats. 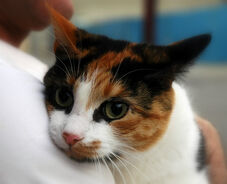 Add a photo to this gallery

Retrieved from "https://whiskerpedia.fandom.com/wiki/Calico_cat?oldid=4679"
Community content is available under CC-BY-SA unless otherwise noted.